It took a few months to readjust, but now that I’m back to a non-traveling lifestyle, I’m ready to geek out on basses, again.

My Return To Geekdom

Once I took a road gig, many of the things I did in my stationary life fell by the wayside, and one of them was bass reviews and demos. It wasn’t practical to test gear from the road, as the opportunity to try things didn’t always present itself, and while there was plenty of downtime, it wasn’t always possible to get work done. But more significant, my personal relationship to gear changed as my musical needs became set in stone. As a freelance player, having lots of options was always a plus. The right tool for the job was the guiding principle in all my choices, and there was enough variety in my workload to justify owning a pretty wide swath of bassdom. Once I got the gig with the Mavericks, not only did I no longer have time to review other instruments, I had no personal interest in anything that couldn’t fulfill the requirements for MY gig. That’s where my focus was, and active 5-strings with round wounds were the farthest thing from my mind. Once I found what worked for the gig, I experienced the odd sensation of not giving a fuck about gear. It was a freeing experience to be unchained from the karmic wheel all gear junkies push. 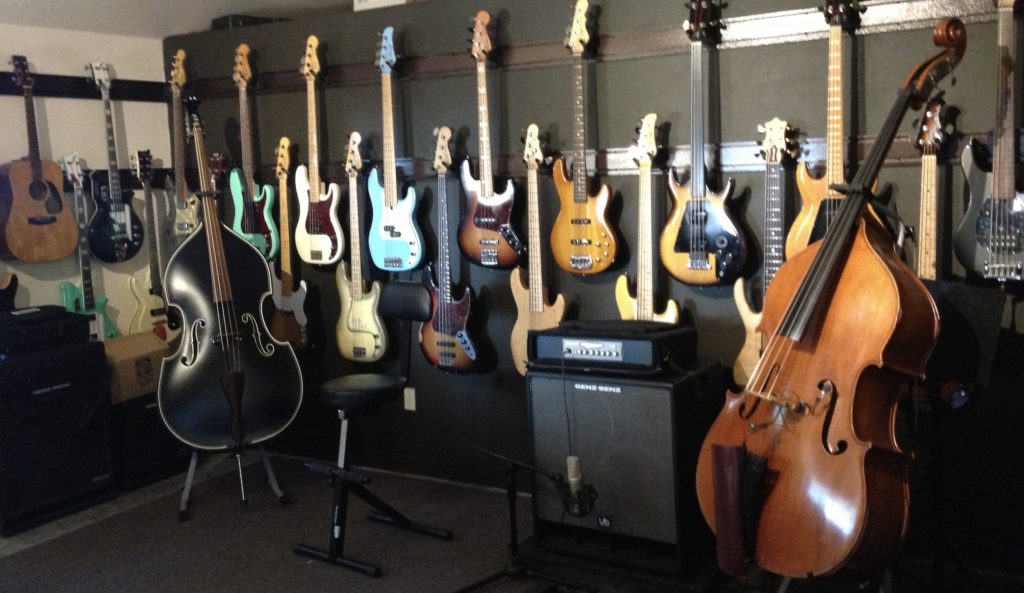 My journey with the gear I play with the Mavericks is an entire topic unto itself, a future post for sure, but for now, I’m examining the return of my GAF. The band went off the road in November of 2019, ending the year early so Raul could get an operation on his foot and be ready in time for our annual dual-cruise gigs in January. I knew that after the cruises (Delbert McClinton Sandy Beaches, and the Outlaw Country Cruise), I’d have until April 1 to be home. But somewhere around mid March, it became obvious that we weren’t going back. We all experienced that initial gut-punch from Covid. The uncertainty, the fear, the reality that in a flash – the entire world would close down, my main income source ceased to exist. I actually kept it together fairly well from an emotional/mental standpoint. I didn’t stress, I accepted this drastic shift rather than tried to fight it. I tightened up on my expenses, and looked for ways to make my footprint smaller. One thing that made no sense anymore was my clinging on to basses, gear, stuff. Who needs it if there are no gigs anywhere, or the chance of gigs anytime soon? Who needs redundant P-Basses* when you can’t find basic necessities? I happily sold several prime cuts from the “meat locker”—untouched basses I’d been paying to store for years. For sure, my lack of attachment was amplified by the loss of my livelihood, but I liquidated instruments I swore I’d carry to the grave. It was not just for the much-needed cash, to me, these survivors of multiple regime changes had lost their intrinsic value. It’s interesting to see how little I miss these items that once felt precious.

With no gigs, and no reason to do much of anything, I reacquainted myself with seasons 1-13 of King Of The Hill, and settled in to a period of dormancy. Truth is, after 5 solid years on the road, having this much time free didn’t feel bad. And the space created in my life by not being obsessed about bass stuff was kind of nice. I actually considered the possibility that I would never play with the band, or anyone again. And for the most part, I was okay. I am reminded of a quote by Spinal Tap drummer Mick Shrimpton, who quite eloquently put it: “As long as there’s sex and drugs, I suppose I can do without the rock n roll.” The first two boxes being checked, I was prepared to leave the third box empty. It worked for a while.

The months dragged on, and one day I got a text from the band that they wanted to get together in Nashville to shoot video for Nugz, an online PPV streaming service. Not ready to fly, I drove cross country to Nashville for the shoot. Getting back into the groove with the band reminded me instantly—yes, there’s a reason for all this. Basses, and amps are used to make music. When I got home, I started having fun just sitting around the house and flailing away on the bass, something I rarely do. No longer restricted to the sonic demands of any gig, I just played whatever I had, just for fun, with no goal other than to go boom. Just as bacon is a known gateway drug for wayward vegetarians, the Nordy Acinonyx (Cat Bass) proved to be my ultimate downfall. 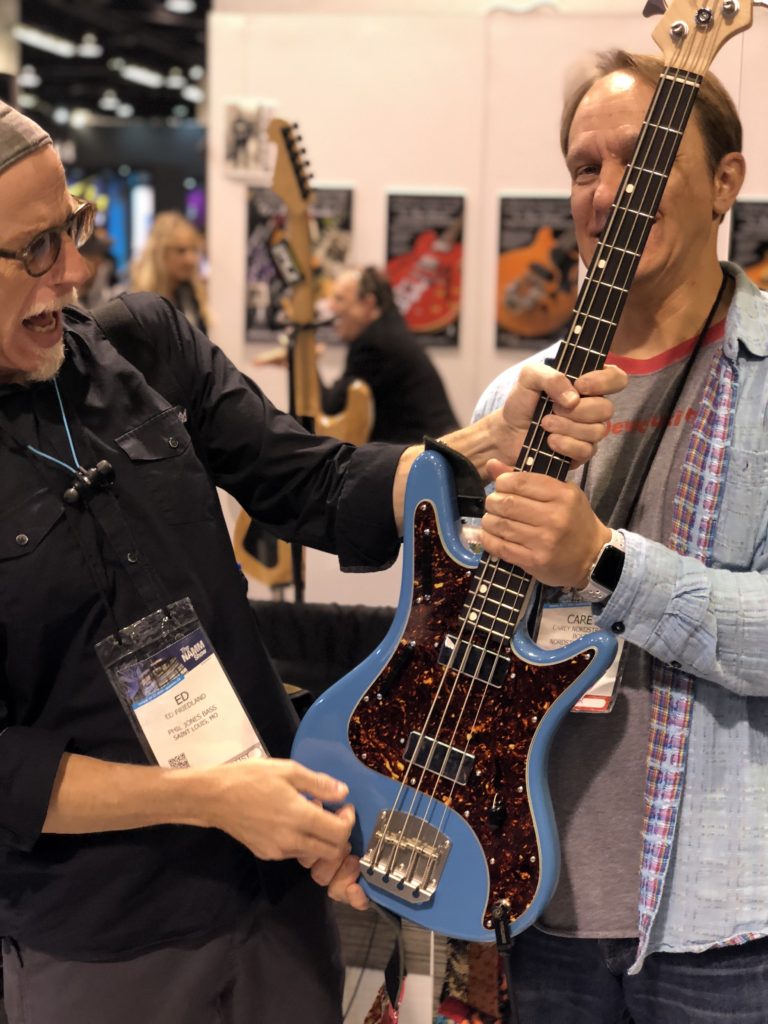 Trying to pull a smash and grab with the Nordstrand Cat Bass.

I’d recently acquired a G&L Fallout Bass, and fallen in love with the creamy goodness of the 30″ scale. But my G&L was in Nashville, under full lockdown, and I wanted a shorty for the house. Eventually, a Tribute Fallout did arrive, but way before that, I saw Carey Nordstrand posting about his new Cat bass, which I had tried back at its NAMM 2019 introduction. The sample bass at the booth was revelatory. I never played a short scale like THAT!  Cool, and quirky looking, unique sounding, but also amazingly playable! This of course was the hand made sample, built by Carey—so yeah. It was fucking amazing!
After seeing several posts and samples of the bass online, I was hooked. Carey happily sent one of his remaining production models to me, and the sheer joy of playing that bass made me feel like doing something again. What does that look like now?  I have all the tools, the know-how, the time, and finally the GAF to make little videos, try to capture the instrument the way I hear it, and share it. Back in the old days, this was my job, and it was usually great, though like anything in life, there were times when it wasn’t.

Sometimes as a paid reviewer, you are asked to write about something you don’t like. The first step was always to figure out WHY I didn’t like it. If it’s a piece of crap, that’s one thing. If it’s just not for me, that’s another. While this is all very fine and professional, I prefer to spend my time playing, and working with things that aren’t crap, that I do like, and preferably ARE for me. If I have no use for it, why spend my time on it? (If you thought “for the money”, don’t kid yourself, doing bass reviews, even for the “Big Bass Media” is NOT a well-paying gig.) Since I started doing BassWhispererTv, a lot has changed. Now, I can be called an “industry influencer.” Getting back into it, I plan on trying to build it up, but keep it on my terms. I have always loathed the in-your-face internet marketing style that sends the same link out 20 times a day. Overhype, hard sell, flashy graphics, techno soundtracks, fake smiles, fake enthusiasm, gimmicky shite… It may work, but it’s not for me. I figure if I do it for the right reasons (fun, genuine interest/appreciation for the gear, to help friends, to provide a service) then what I need (money) will flow my way–it’s how things have always worked for me. For now, it just feels good to be “back at work.” Doing videos feels like a return to normalcy, and interacting with my viewers is fun. I’m looking into alternative ways I can use this to generate income–more views equals more ad revenue on YT, but I’m also looking at affiliate relationships with certain companies, perhaps sponsorship… Main thing for me is to not be beholden to any interest other than my own. So, I’m back to Whispering, and looking for new ways to make a living in a Post-Covid reality. Best of luck to all of us.

The redundancy protocol is a well-represented idea in my collection over the years. Two basses of the same genus, one with rounds, one with flats. Or maybe one fretted, the other fretless. Or perhaps one maple board, the other rosewood, or ebony, or all three, and fretless… It’s a rabbit hole I’ve been down numerous times. Sometimes I’d get on a kick for a certain company—I think I had 5 or 6 Lakland at one point. My arsenal has changed a lot over the years in part due to my workload, my interests, and a bit of “the search”thrown in. Even though I’ve pared down the collection significantly, my Mavs gear is full of redundancies. The Chadwick and the King for uprights, the Azola and the KK for Baby Basses, and the Fallout and the L1000 for G&L passive 4-strings with flats. I’m covered….