I’ve had a love affair with Amsterdam since 1985 when I first played there with Barrence Whitfield and the Savages.

There was a full mobile recording truck parked outside… SOMEONE has multitrack of that night!

I’d spent the day wandering the city, smoking out in a variety of coffeeshops, then played an epic show at the Paradiso, complete with 6 or 7 encores for the thunderous crowd. It was my first time overseas, and my first time in a place with legal weed. I’ve had a MMJ card for 4 years now, but back in ’85 it was like going to Mars. I had recurring dreams for many years, always the same – looking for a coffeeshop and finding the “person”. Many years later, I joined a band with a great following in the Netherlands, so I got to return several times a year and fall in love all over again.

For years I thought it was just the legal weed that made me pine for Amsterdam, I am after all, an inveterate stoner. Once legal cannabis became more common in the US, I realized that there is more to my attraction than Dutch Sensimilla. The social attitudes in the Netherlands are more relaxed and accepting, not just about weed and drugs, but also sex work, multiculturalism, the arts – the social fabric in general. The Dutch are typically nonchalant about things Americans get all bent about, and then use to imprison people. It’s a freeing experience to be thousands of miles away from the puritanical bullshit that still grips the hypocrites that govern America. Let’s face facts, as a group, politicians and lawyers are very big clients of the sex industry. Lots of them smoke weed, and take illegal drugs too. But they legislate against these activities, and put mostly black and brown people in jail while they continue to abuse the trust of the American public. It’s wrong, but white America has institutionalized this, right? But when you’re no longer surrounded by it, when you’re in the middle of a more open culture, you can feel it. Part of me relaxes in Amsterdam that doesn’t let go in the US. The lack of hypocritical self righteousness in social values goes a long way toward creating a vibe of ease and joy. The Netherlands has their own problems, yes – but at least sex, drugs, and rock and roll aren’t going to get you busted.

One rainy day while walking around Amsterdam’s endless street-lined canals on space truffles, it occurred to me that the deep connection I feel to the city in part comes from being a native of NYC. New York of course, was once the Dutch settlement of New Amsterdam, and the architecture of lower Manhattan certainly echos the old country. 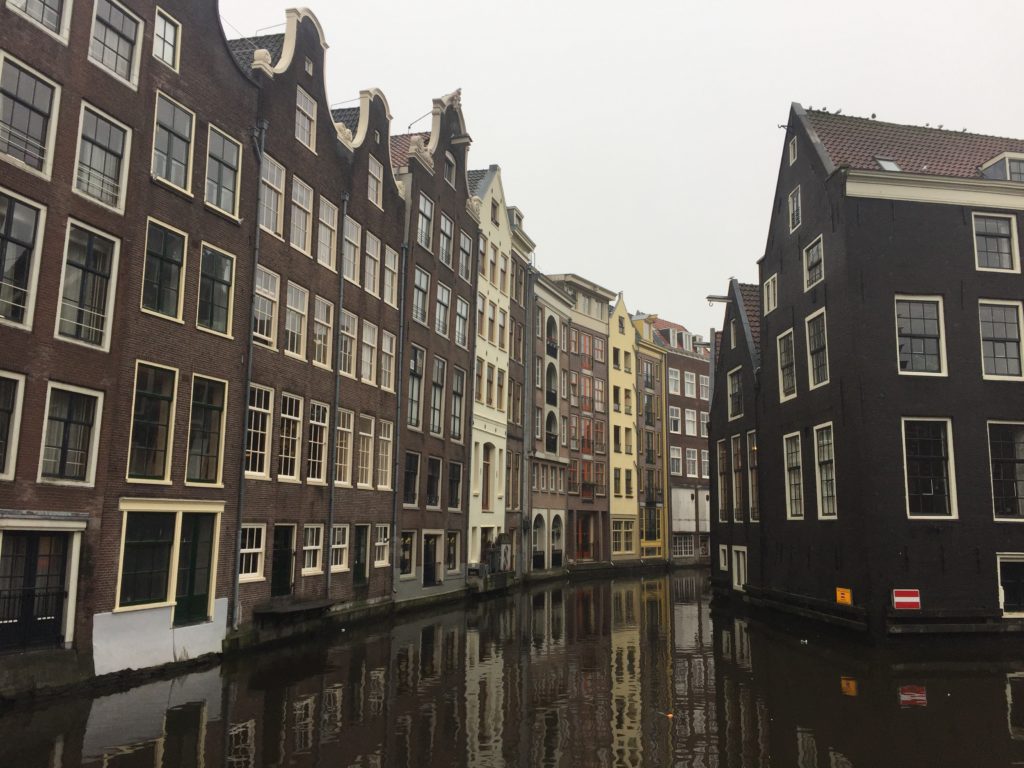 The architecture amazes me. So beautiful, yet all I can think about is “how the hell did they build that?” “Who lives in the basement?”

Amsterdam’s canal system, and the many buildings whose foundations are completely submerged are technologically amazing considering how old the city is. But I wonder what it would be like to have a basement apartment. They figured out their elevation problems a long time ago, and hopefully US climate scientists and engineers have examined the Dutch public works infrastructure enough to have some ideas for preventing future waterfront property on 14th St.

Just like when I’m back in New York City, my favorite thing to do in Amsterdam is walk. It’s a great city for pedestrians, and despite my total inability to recall or pronounce a single street name, I know where I am most of the time. Usually we stay at the Park Central Hotel, next to Vondel Park, the art museums, the Hard Rock. It’s a nice hotel, and well-located a few rings out from the center of town. It’s close to the Bull Dog, the Leidseplein, the Pancake House, and my favorite coffeeshop, The Rookies. There’s Cafe Alto for live jazz, a Mexican restaurant that won approval from the homeboy contingent of the band—just like in NYC, everything you need is all within a short walk. I usually hit Rookies first, get 6 grams, the legal limit per transaction, sit down and roll something up. What I think is missing in the legal US cannabis world are cafes to smoke in. The weed in Amsterdam can be very good, but it’s pricey. What you’re really paying for is the experience of being able to purchase, and consume in a cafe setting. 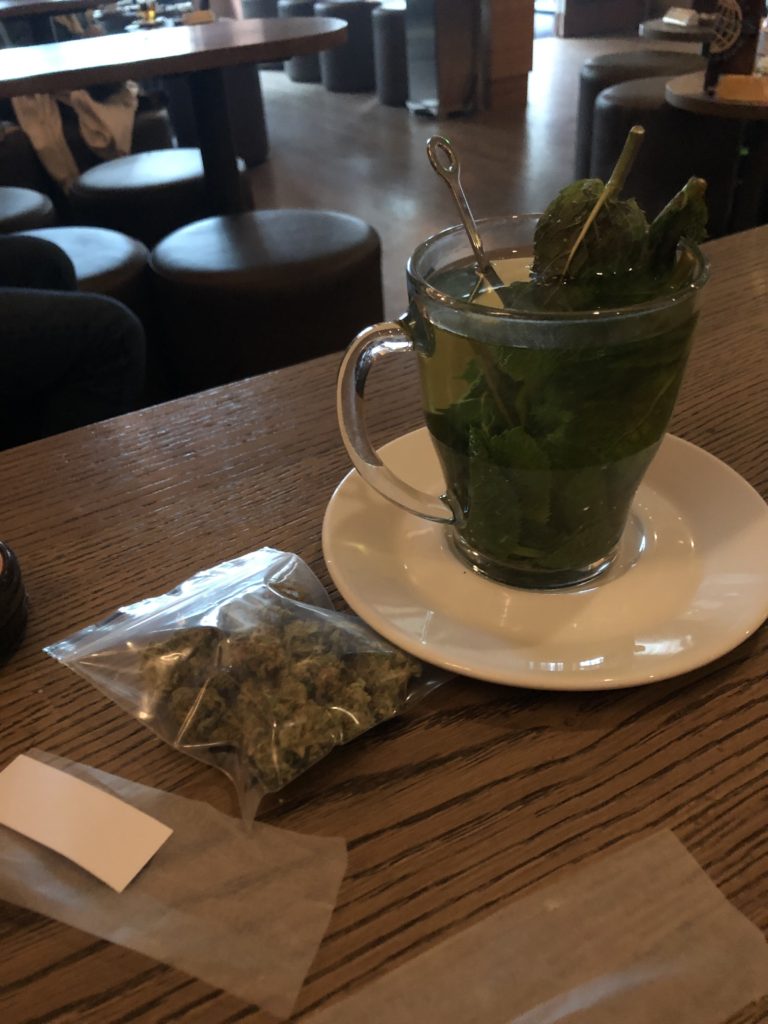 The coffeeshops are all different, some are like giant sports bars, while other are small, cozy chill spots with interesting music playing. Imagine if you could simply hang at your neighborhood java joint—and enjoy both!

Even in long-time legal cities like Denver, Portland, or LA, there is nothing like this, though Vancouver, BC does have several weed-friendly cafes. I’m sure the half-hearted legal status of cannabis in the US makes it a licensing and logistics nightmare, or even impossible, but it’s a business model that would thrive in any legal state. I have hopes for the future.

In Europe, people are in the habit of rolling their weed with tobacco. If you buy a preroll, make sure it’s not a mixed joint. I personally can’t take it. Even many years ago when I did smoke tobacco, I couldn’t mix it that way. It makes me dizzy, nauseous, and reminds me of my first attempt to smoke a cigarette at 12. People watch me roll up a full gram of uncut Silver Haze, and no doubt see me as a typical wasteful American. Now that tobacco is banned from indoor establishments, most coffeeshops have jars of  dried mint leaves on the table to mix in with your cannabis, but I’ve never tried it. When I’m in Amsterdam, it’s usually a day off, so I have nothing better to do than walk to a coffeeshop, sit and smoke, drink coffee or mint tea, listen to music, people watch, then get up and walk to another coffeeshop. Lather, rinse, repeat.

I’ve maintained fantasies of living in Amsterdam since my first visit 1985, but in 2015, I started going there to play two or three times a year. I try to imagine what life would be like as an upright bassist in that town. The logistics of getting around are daunting. Owning a car seems like a liability, cabs are scarce. Public transportation is good, but… damn, I’m 61 years old, I ain’t lugging that thing on a friggin’ street car. 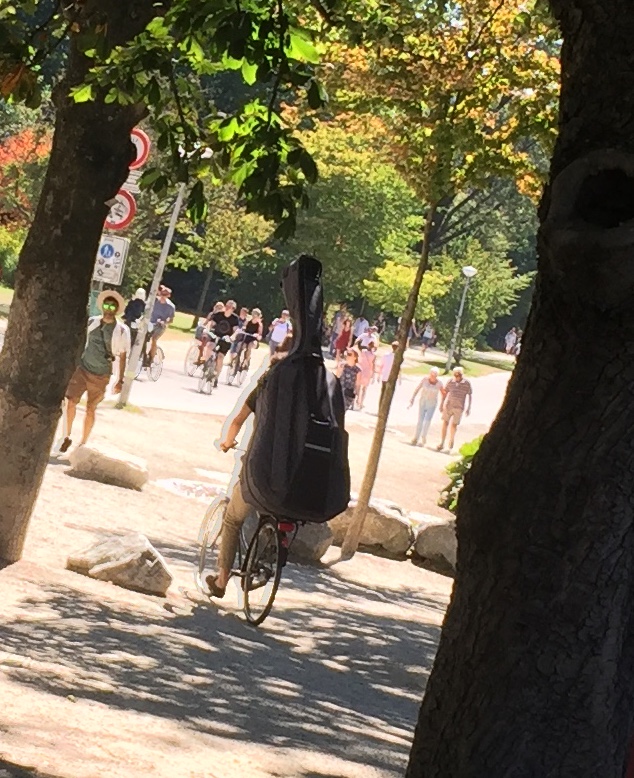 Saw this guy pedaling through Vondelpark. Not me brother.

Amsterdam pedestrians have a lot to look out for – there are cars, buses, trams, motorcycles, scooters, and mopeds on the streets, as well bikes, mopeds, scooters, mini electric cars, on the bike paths that adjoin the sidewalk. It would be very easy to get creamed in traffic, but somehow everyone stays alive. In America, 20 people a day would die just stepping out of the Hotel Park Central. 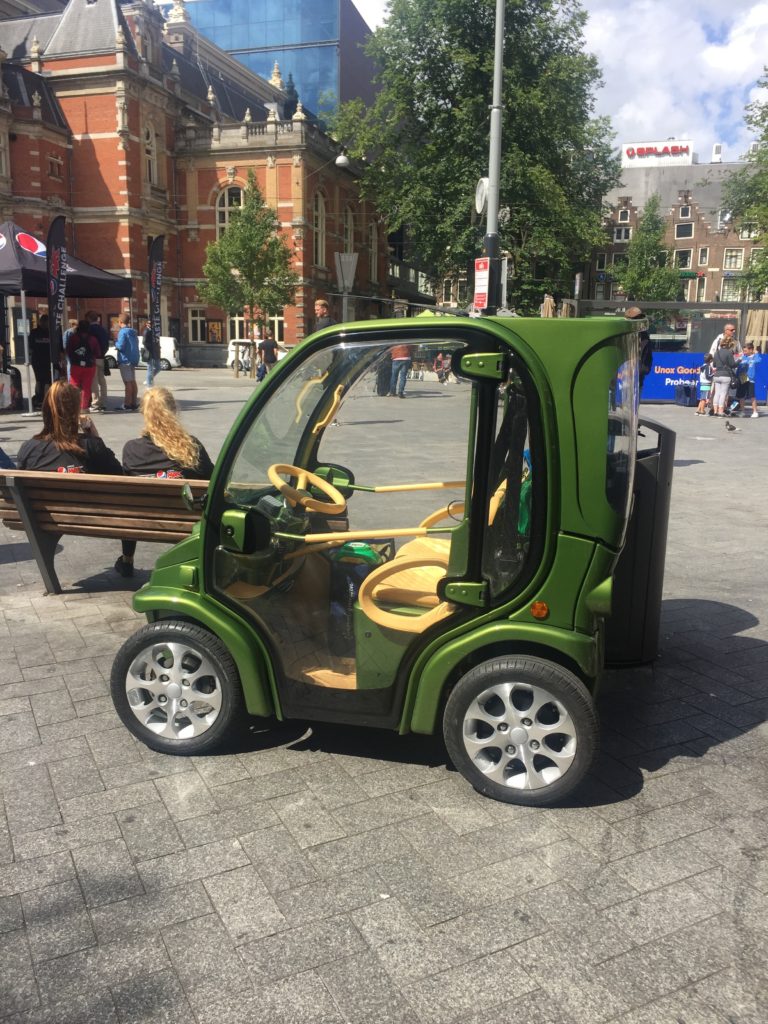 They drive these on bike paths in Amsterdam!

The urbanite in me will look at any city I enjoy and try to piece together what life would be like there. Could I actually function here? I’ve wondered that about San Francisco (too expensive), Montreal (too cold), Toronto (ditto), New Orleans (too humid), Vancouver (all three), but when I get real with myself, I acknowledge that I need to live someplace more manageable, warmer, drier, and cheaper. In these times, you pay a world class price to live in a world class city, and not just a financially. I’ve accepted that relocation is unlikely, but was at least satisfied knowing I could come back and play to enthusiastic Dutch crowds a few times a year. Sadly, at this point it’s unsure if that kind of travel, if that kind of life is even possible anymore. Will I ever get back to Amsterdam? It’s possible that I won’t. But maybe after a while, the dreams will return.