In April 2017, the Mavericks went to Cuba to shoot “Havana Time Machine”, a PBS special that took lead singer Raul  Malo around the city, meeting and singing with musical luminaries, culminating in a concert at Los Jardines de la Tropical.

For a Cold War kid like myself, the idea of going to Cuba was strange. It had been off limits most of my life, and the Cubans I knew growing up never gave me the impression it was someplace I’d want to visit. But the music… Well, the music is amazing, and just about every Cuban musician I’ve met in the US is a badass motherfucker of the highest order. Cuban food is some of my favorite Latin cuisine, and hey–another great Mavericks adventure was in the works! 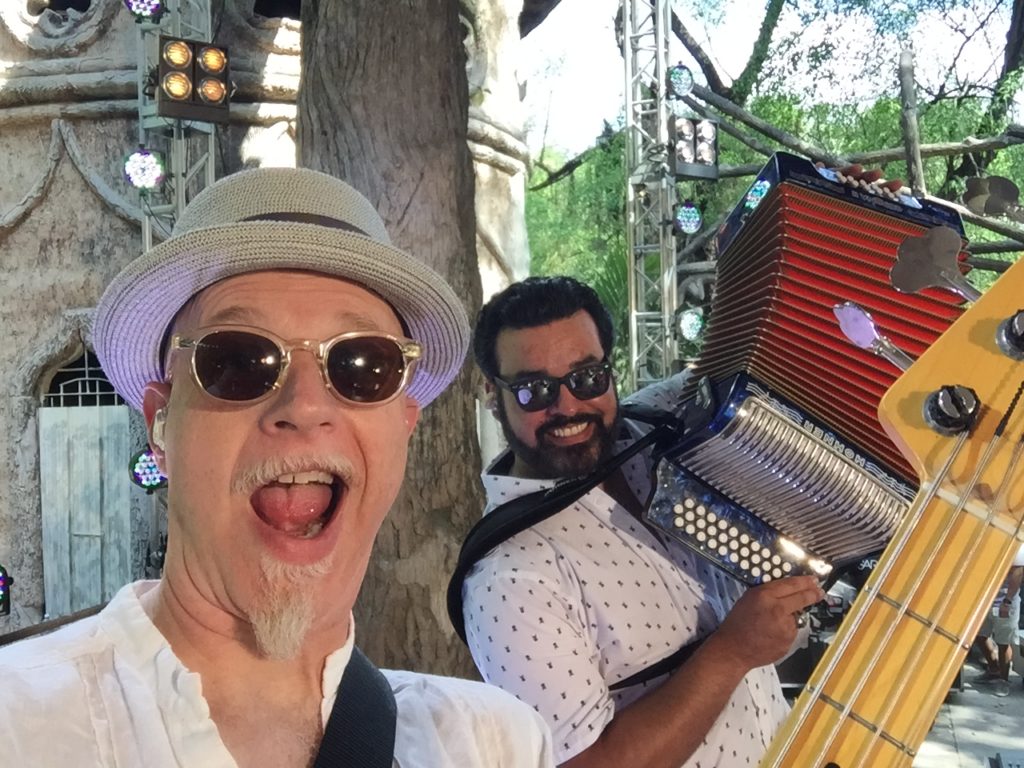 Michael Guerra and I selfie it up.

Flying Southwest from Miami, we were there practically before they could hand out pretzels. The band travels with a lot of gear, and the whole luggage/customs/transport to the hotel took longer than usual. Havana airport is small by international standards, but efficiency isn’t necessarily a goal in a communist country. Standing around the airport for several hours, I couldn’t help but notice that  almost all the Cuban TSA officers were really attractive young women wearing tan uniforms with mini skirts and fishnets. Sadly, there were many signs forbidding photographs, so you’ll have to believe me.

We got to our rooms, (most of us stayed at a AirBnb type situation in a nice, big house) cleaned up and went for dinner. The restaurant was nice, but the food took a long time, and after a long day’s trip—I was able to get past the “tired” beef, and heavy, recycled grease. While I love Cuban food, the good stuff must go to the communist big wigs – the food I had tasted like leftovers. You want great Cuban food? Go to Miami, hell, even Nashville has better Cuban food! 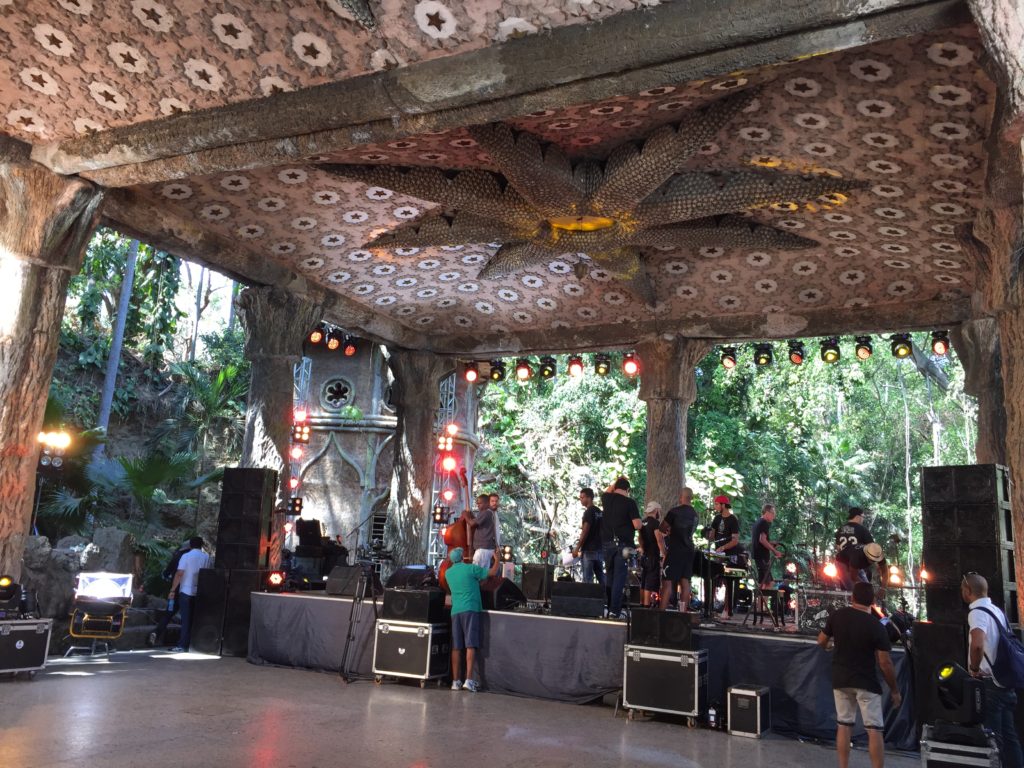 View of the stage at Los Jardines.

The next day we set up at Los Jardines, a very unique outdoor venue in Havana. Built in the late 1800s as  a “pleasure garden” for La Tropical brewery, it was the scene of many parties, concerts, and events in its day. While it is still used, it had the feel of a place lost in time. The concrete pillars, crumbling as they were, looked like tree trunks, and like the nearby trees, were in the process of being reclaimed by the primordial jungle that surrounded us. The ceiling looked like a coral reef, with concrete starfish maintaining their grip on the decaying structure. The scene at setup/rehearsal was chaotic, not only was this a live concert with 4 bands, it was a full-on television shoot in the middle of an overgrown park in a not-first-world country. The infrastructure is not really there for large events, but Cubans by necessity are some of the most resourceful people on the planet. They made it work, despite some very sketchy conditions.

Speaking of sketchy, the band had another issue with the trip. Going to Cuba is not a simple thing for an entire band, and there was a lot of paperwork and preparation to do first. Our regular trumpet player is Cuban, and didn’t have some of his passport stuff worked out, so he chose not to go back for the show. Knowing his personal history in Cuba, I don’t blame him for staying behind. We had a sub trumpet player all set, a guy we’ve used before from LA. But two days before the shoot, he cancels on us with some lame ass excuse. Basically, he got a call he didn’t want to miss in LA, so he fucked us. Max Abrams, our sax player practically went gray overnight with the stress of having to find another player on short notice. It was impossible to find an American and have the paperwork dealt with in time, so instead, he went shopping in Havana for a trumpet player. Luckily, hot Latin trumpet players are much easier to find in Cuba than in Nashville. He went to a jazz club and heard Lorenzo Molina, and signed him up for the show. Lorenzo is a young player, supremely talented, who came in cold and did a great job—they train musicians well in Cuba. He’s been the 9th member of the band since 2017. In fact, not only did “Lolo” come to the US, so did another band from the concert, Sweet Lizzy Project. Raul and his wife Betty arranged for these musicians to come to the US, and now they live in Nashville and are on the Mavericks record label, Mono Mundo. As a side note, a few months ago, Lorenzo and a friend were attacked in a Franklin, TN bar for “speaking Spanish.” A bunch of knuckle-dragging racist pricks couldn’t bear to hear people speak something other than their own dialect of “English” in their hallowed sports bar, so 4 guys picked on 2. Welcome to America, Lorenzo. 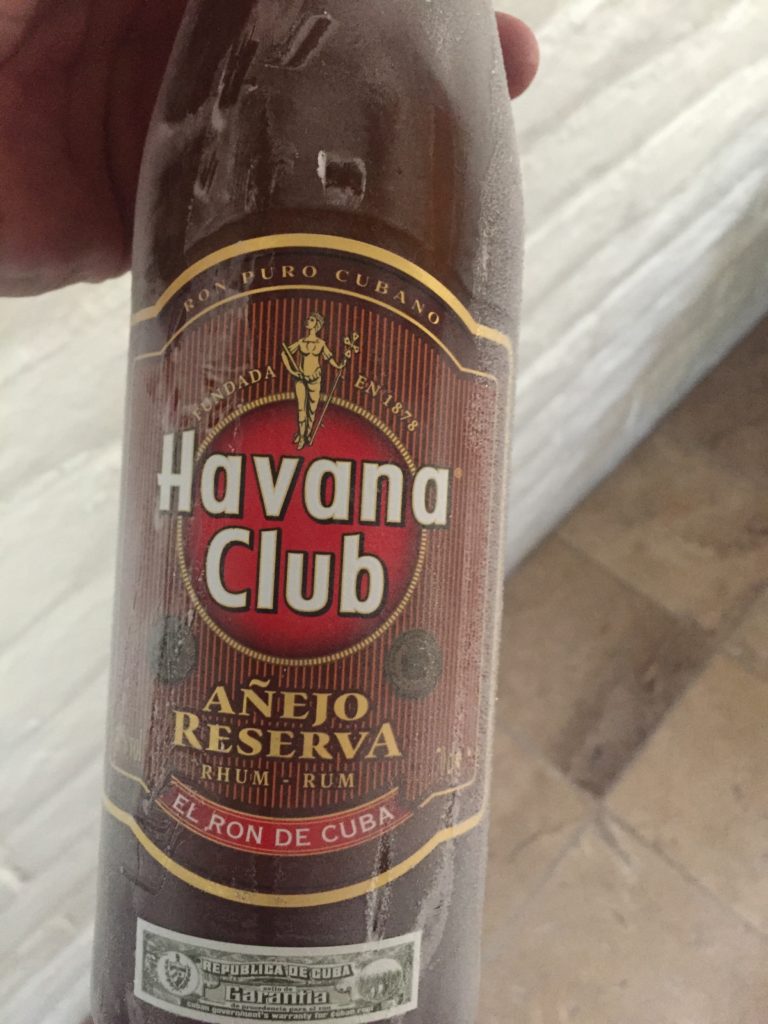 One thing you may or may not know about the Mavericks is we have several members that are professional-grade weed smokers, myself included. A typical Mavs show is always preceded with the ceremonial intake of cannabis leaves, but in Cuba, that wasn’t possible. But, rum is plentiful, and very good there, and so… perhaps some of us over served ourselves… No matter, we are trained at this, and the band played great, the show was a success… but the ensuing wrap party, and endless supply of rum made for a very rough morning for some folks at Havana airport. At the after party, a musician I had met there asked me what I thought of Cuba. I told him I liked it, but wished we could find weed here. He went home and brought back a needle of a joint of some shwag that didn’t smell or taste right, but the gesture was so appreciated—we’re friends for life! We walked around the corner, passing it while keeping our 360º vision on hyper alert. You can believe that getting caught over there with even that minuscule amount is big trouble!

The architecture, the music, and the vintage cars give Havana a visual character that can’t be manufactured. But the sense of faded glory, the crumbling infrastructure, supply shortages, poverty… this is what Castro brought to the gem of the Caribbean. Despite authoritarian rule, the spirit of the people survives—not just through music. They make it work with whatever they have, whether its a car, an instrument, or an old piece of beef. And in the world of music, Cuba has consistently produced some of the greatest players in the world on every instrument—but the trumpet? Hell yeah—and now the Mavericks have two of them!